It was only a few weeks ago that I suddenly decided I would make a special photo series with a fish as my main character. I remembered seeing a photo years ago where a fish jumps out of it’s own bowl into another to be with his friend in the other bowl. I decided I wanted to do that same shot so I figured out how I wanted to light the scene, how I would make ends meet and I started shooting fish. Hours and hours of shooting… yes… I learned that fish are not very good listeners… I’ve told them over and over what I expected them to do and sometimes it could take hours for them to do it… and sometimes they didn’t do it at all and I would have to use another fish. Too bad, brother… you’re not getting the part!

Kidding aside, “Fishy Business” is a difficult series to make, but I think it’s fun for many ages to look at these photos because reality and fiction join hands in these images. People have asked me how I managed to make the fish jump, and as a joke I told them that I slowly boiled the water that the fish was in… some believed I was speaking the thruth, which of course I was not. It’s all trick shots and some photoshopping. Image manipulation.

The latest in the series, “Surf’s Up!” features a fish riding a wave of water that spurts out of a tilting bowl. This one in particular was hard to make. I can’t remember how often I threw the bowl to have the water gush out and shoot a frame at the same time. All my equipment packed into plastic bags to protect it from getting wet and shortcircuiting on me.

Soon I’ll put this series up for sale and you’ll be able to purchase your own copy if you please. I’ve already ordered them on aluminum myself – they’ll brighten up my office and I’ll think back of these precious moments between me, the fish and my camera…

This series currently consists of four unique images, soon to be expanded with new productions; “Breaking Barriers”, “Crowded House”, “High Rise” and the latest, “Surf’s Up!”. 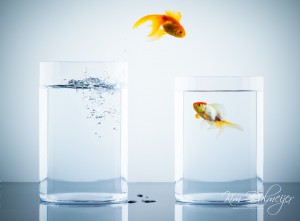 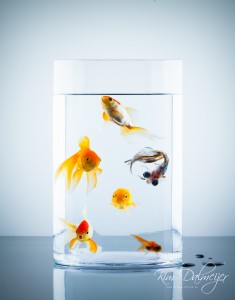 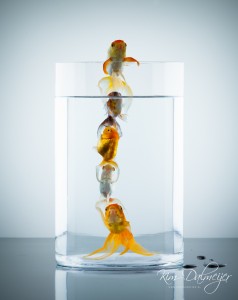 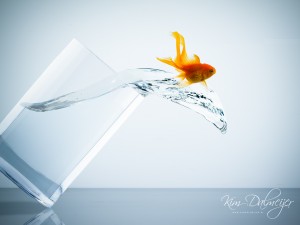